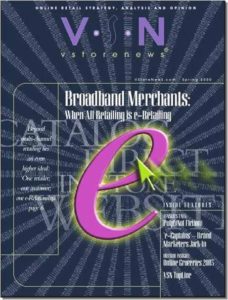 IN 1996, JAMES TENSER was a respected business press editor based in New York City who had built a 15-year record of success covering retailing and brand marketing.

Amazon.com was just appearing on the radar of serious journalists and industry thought leaders. Online grocery pioneer Peapod.com, already six years old, was making an ambitious transition from a proprietary dial-up technology to a new process that exploited cutting-edge Web browsers like Mosaic and Netscape.

After reporting on that and other early innovators’ attempts to promote the sale of groceries over the Internet, Tenser became convinced that the retail industry would never be the same. He began developing two Web sites, VStoreNews.com, an informational site for retailers and brand marketers, and StoreDotStar.com, an interactive virtual store-finder for consumers. Both sites launched quietly in 1997 while Tenser developed a business plan. He focused on developing a paid-circulation business periodical, or e-letter, devoted to covering the emerging virtual retail channel.

Fast Start – 1998
VStoreNews had its coming out in May of 1998. To our knowledge, it was the first serious business periodical, online or in print, to focus exclusively on the coverage of online retailing. If this implies a first-mover advantage, it was a distinction that would not last long.

By that Summer, at least three well-financed, competing trade magazines had appeared on the scene, and one consumer magazine – all devoted to coverage of the phenomenon that was virtual retailing. The mainstream media had a field day hyping and dissecting what it at first called “e-commerce”.

Fast Company – 1999
In the Summer of 1999, Tenser accepted an offer from Nexgenix, Inc., a privately-held technology integration firm based in southern California to merge the VStoreNews business into Nexgenix’s newly-forming Retail Strategy consulting practice. The deal promised abundant development funds and access to a wider audience. Tenser was named Principal of the practice group and he spent nearly two years helping Nexgenix pursue, win and deliver – at Internet speed – opportunities inherent in the “new economy”.

That exciting association ended by Spring of 2001, as the dot-com roller coaster took yet another of many plunges. Nexgenix wisely downsized, and Tenser took the opportunity to re-acquire the VSN assets and intellectual properties. Although publication of VStoreNews had been suspended for some months, considerable equity remained in the brand, and a significant consulting dimension had been added to VSN.

Standing Fast – 2001
By now it had become clear that selling content to a narrow audience – even exceptionally well-written and thoughtful content – was not a sustainable business on its own. Virtual stores had evolved dramatically over three years, to the point where traditional chains now dominated online selling – the so-called “multichannel” retailers. Tenser determined that VSN’s future lay in knowledge-based services, not subscriptions. Instead of re-launching VStoreNews at considerable cost, he chose to contribute commentary and content to a select group of industry periodicals with much wider audiences.

VSN Strategies emerged in 2001 as a boutique strategy consultancy, assisting select clients with positioning and communications issues through its proprietary Retailativity™ analytic approach. Selected VStoreNews content – including past VStat and VSN TopLine bulletins, has been collected into an archive on this site, where it is free to all.

Thanks for your interest! Please provide the following information to access the VSN Expert Storytelling™ Overview download link:

Thanks for your interest! Please provide the following information to access the VSN WebVox™ facts download link:

Thanks for your interest! Please provide the following information to access the VSN Gold Paper™ Series facts download link:

Thanks for your interest! Please provide the following information to access the VSN WebVox Cascade™ facts download link:

Thanks for your interest! Please provide the following information to access the VSN Framework for Best Practice download link: